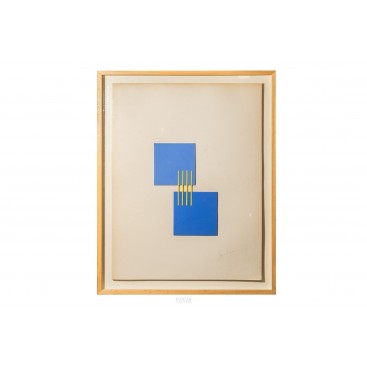 Albert Chubac was born in Geneva in 1920. After studying decorative art, then at the Beaux-Arts in Geneva, he obtained grants to travel to Italy, Algeria, Spain, Egypt and Greece, stages which will mark his work.

He settled in 1964 on the Côte d ‘Azur in Aspremont in a very Spartan house, attracted by the light, the sun and the colors of nature.

The year 1967 is the year of the establishment of the School of Nice. He will work and exhibit alongside Aman, César, Tinguely, Gilli, Ben, Rayse, etc ...

In 1990, it was the consecration with the opening of MAMAC in Nice. Albert Chubac then becomes accessible to the general public.

He will use solid primary colors, will develop modifiable structures and then develop the collages in three dimensions.

Gradually, he broke away from his classical training and figuration to move towards abstraction through the encounters and influences of contemporary artists.

Always in search of simplicity, He will radically limit the plastic means with a reduced palette, geometric shapes and simple gestures to concentrate on minimum conditions of possibility.

His work, which lies between constructivism and geometric abstraction, is playful and imbued with the artist's joie de vivre.

In 2004, following the major retrospective at the Museum of Modern and Contemporary Art in Nice, he donated around one hundred works to the City of Nice.

During the workshop auctions in Nice and Marseille, the Harter Gallery acquired the largest part of his work.

30 Other products in the same category